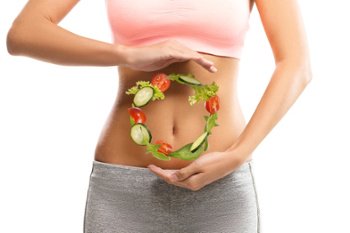 Taking probiotics with a Big Mac might not do you any good at all, according to an article published by the Division of Immunology at Harvard Medical School. The Western diet (also known as the Standard American Diet, or SAD) is very low in dietary fiber and high in sugars and processed grains. It is this Western diet that has shifted our gut microflora to become less diverse than the microflora found in people who consume more traditional diets. It is this type of diet which is wreaking havoc on our health and not providing an optimal environment for growing beneficial bacterial.

In one study, mice were fed a fiber-rich (FR) diet, a fiber-free (FF) diet and prebiotics (food sources for probiotic bacteria). Some groups were fed alternately to mimic the human diet. Results showed that on the fiber-free diet, the numbers of two mucus-degrading (non-beneficial) bacterial species – Akkermansia muciniphila and Bacteroides caccae increased, whereas the growth of two fiber-metabolizing (and beneficial) species, Bacteroides ovatus and Eubacterium rectale, decreased. The mixed diet mice had a mucus layer of intermediate thickness. The prebiotics diet results were similar to a fiber-free diet, suggesting that eating foods containing prebiotics does not have the same beneficial effect as actually eating dietary fiber.
A Western diet yields an overgrowth of mucus-degrading bacteria combined with a thinner gut mucus wall. This only increases our vulnerability to pathogenic bacteria, which outcompete any attempt at supplementing with good bacteria, rendering probiotics useless and devoid of health benefits. In summary, a person’s diet needs to support the survival and efficacy of probiotics. Therefore, before pondering the CFU count on the probiotic label, be sure the your diet is replete with a fiber-rich foods that promote the growth of beneficial probiotic bacteria.