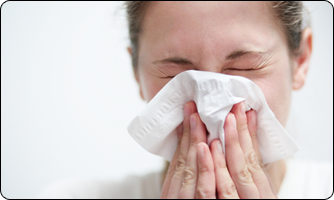 A woman had suffered from severe sinus symptoms over the course of a year. She had nasal congestion, left maxillary sinus pains, a very hoarse voice that sometimes gave out on her, and a continuous thick greenish nasal discharge.  She had been treated with antihistamines and decongestants, multiple courses of antibiotics, local steroids, and finally with sinus surgery when symptoms were unrelenting.  The surgery improved her symptoms for about one month, after which they resumed in full.

She was advised to have another, more extensive operation, but figured it was unlikely to work.  At our office she was told to eliminate certain foods, especially dairy products, and began treatment with a saline and xylitol nasal spray to cleanse the nasal passages and remove bacteria, irritants and allergens.  Another nasal spray contained an antifungal agent, since fungus is often found at the core of sinus conditions, along with an antibiotic and low dose steroid.  She received intravenous infusions of high dose vitamin C to suppress inflammation along with other vitamins and minerals including magnesium.  She started acupuncture twice a week, which often helps to clear sinus and lung conditions.  Allergy desensitization injections against grasses were begun, twice a week.
She installed a strong air filter in her home.

Her symptoms markedly improved, her voice came back, and the mucus began to clear.  She left town on vacation to Colorado and improved further.  When she returned, however, she rapidly got worse.  Professional inspection of her home revealed mold in air vents, as well as rat droppings and even a rat carcass in the attic.  She moved out of her apartment to a hotel, requesting the landlord to make improvements.  Symptoms progressively cleared.

Sinus surgery is unlikely to be curative, and antibiotics offer only temporary relief, when the causes of illness remain, usually allergies and irritants which cause inflammation and set the stage for infection.  Evaluating the home and work environment is important, especially if the patient improves when absent from those locations.  Sometimes toxic mold grows behind the walls, due to unseen water leaks, and extensive renovations are needed.  An experienced inspector can locate the problem.