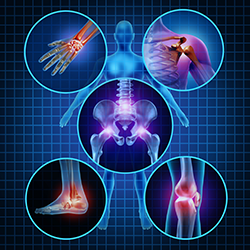 Prolotherapy is a method of strengthening weakened, stretched and partially torn ligaments and tendons, enhancing the support systems of bones and muscles. These connective tissues are damaged as a consequence of injury or just wear and tear, resulting in altered structure and function. Pain often intervenes, and efforts to compensate for imbalances lead to further injury and impairment. Ligamentous injury may lead eventually to arthritis, and chronic irreversible problems. Surgery on bones and joints may be recommended and pursued, often without resolving the problem, because the real problem has not been addressed. Prolotherapy is underutilized. It is a non-surgical approach that can strengthen backs, necks, arms and legs, eliminate pain and restore function.

Prolotherapy is very different from using steroids. Steroids actually weaken the tissues into which they are injected. They do not promote healing, but retard it. Continued use of steroids causes joints to become looser and more unstable. Prolotherapy has the opposite effect, strengthening joints and connective tissue. Prolotherapy provides benefit in over 50% of cases. It may be effective even after surgery has been unsuccessful. Almost any area can be treated with prolotherapy. The most commonly treated locations are the knees, shoulders, lower back, hips, neck and elbows.

Prolozone is Prolotherapy Plus Ozone

Prolozone, or prolotherapy combined with ozone, is a highly effective treatment for painful, injured or degenerating joints, tendons, ligaments and muscles. In prolotherapy, sugar water containing vitamins, minerals and other nutrients, is injected into the involved area through a slender needle. This stimulates lymphocytes, cells of the immune system, to enter and promote the growth of new tissue. Over the last year, we have been adding ozone to the injection, with even better results in handling pain and disability.

Ozone is a gas produced from oxygen in a special machine. It is an activated form of oxygen, and works through several mechanisms to heal and grow new tissues, mainly through the enhanced production of energy within cells. Ozone diffuses easily throughout the area where it is injected, so a single injection can treat several damaged points in the same space. Even severely degenerated joints may respond, so it is worthwhile to attempt prolozone therapy when surgery is the only other option.

Over several years we have treated knees, hips, shoulders, ankles, elbows, necks and lower backs, often with improvement after only one or two treatments. Treatments are given at least two weeks apart to allow for full treatment benefit. Treatments can be repeated as often as needed, since effects are cumulative.