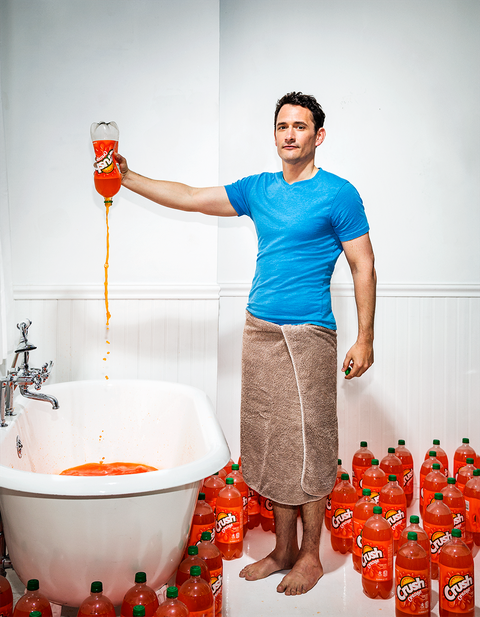 Giving up soda changed my life. In fact, I’m convinced that quitting pop extended my life, shrank my waistline, and made me happier. You maybe already know soda is bad for you, but you might not know just how bad.
I grew up in suburban Florida with a fridge full of Welch’s grape soda. I drank Orange Crush, Mello Yello, Dr Pepper, and the rest of the brightly hued, syrup-sweetened rainbow. My soda habit continued into college, where I powered through hangovers and all-nighters not with coffee but with Diet Coke, and slept with 2-liter bottles of Minute Maid orange soda by my bed in case I needed a nighttime drink.

One of my happiest days, besides the birth of my child, was the introduction of Coke Zero, a calorie-free beverage that tasted like the real thing—in a cool black can, marketed toward men. Sold! (Soda manufacturers want you to think that some sodas are healthier for you than others. They’re not. More on that later.)

Too ashamed to keep 2-liters by the bed after I married, I had cases of cans delivered to my work office. I bought myself a Coca-Cola mini-fridge (and one for an employee). And if you Google Image – search my name, you’ll find a photo of me at my desk with a 2-liter bottle of Diet Coke and an 8-ounce can next to it. 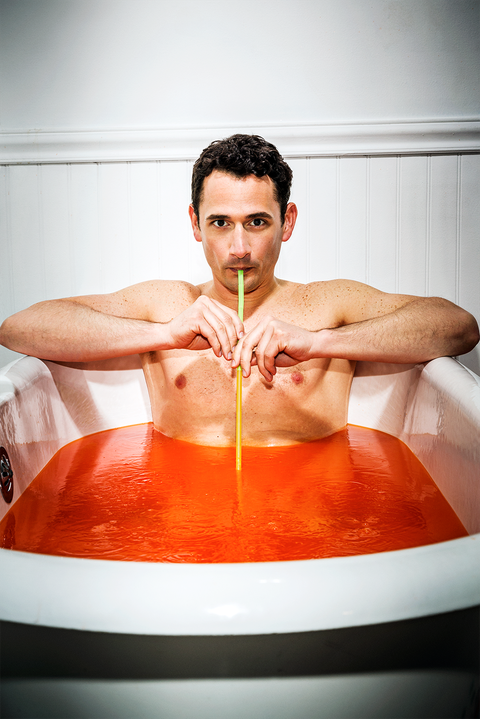 Despite knowing that drinking soda can contribute to weight gain — and the host of conditions that are associated with it — Americans are still in its grip. During most of my soda-drinking years, I was 20 pounds heavier than I am today and had high blood pressure. I felt unfocused, sluggish, bloated, and depressed.
America has a Soda Belly Epidemic. This is the case for the cure.
You’d think that’d be enough for me to pinpoint the cause and quit soda forever. But it took a simple headline to seal the deal. This was my life-changing moment: “Soda May Age You as Much as Smoking.” That was the headline based off a 2014 study published in the American Journal of Public Health.
Dying from soda is one thing — scary, yes, but so far in the future that it’s hard to take seriously. But looking older from it? That’s a dealbreaker!
I’m the lucky one; vanity is the least of America’s concerns. Experts blame soda for contributing to the obesity epidemic in this country, and the medical studies keep rolling in to prove the point. A 2016 Circulation study found that compared with nonconsumers, people who drank soda or other sugar-sweetened beverages gained an extra half pound of visceral fat. This means you can go from your lean, slim self to carrying around a pop-induced paunch just by drinking a daily soda, sweetened iced tea, or fruit punch. Yes, just one a day.
A Case of Life or Death

It’s not only your waistline that’s at risk if you’re a soda swigger.

“Two sodas a day DOUBLE the risk of heart disease,” screamed the Daily Mail recently. Dubious of tabloid claims, I called one of the researchers. “Two sodas a day appears to double your risk of dying from heart disease,” says Jean Welsh, Ph.D., assistant professor of pediatrics at Emory University. “And it was just the drinks. We looked at sweet foods, and there was no similar effect.” She believes that’s because the sugary foods have fat, protein, even some fiber, which changes how they metabolize, “versus the beverages, which tend to be just sugar and water.”

Research from the University of Texas Health Science Center (UTHSC) at San Antonio back in 2008 linked a person’s risk of obesity to their diet-soda intake. Compared with people who don’t drink artificially sweetened beverages, here’s what daily intake means:

In 2016, UTHSC followed up and found that participants’ waistlines increased . . .

So average waist circumference increased almost four times more in the daily diet-soda drinkers than in those who abstained, over nearly a decade of follow-up.That’s a pretty remarkable set of stats. You don’t have to guzzle Double Gulps from the 7-Eleven to put yourself at risk; you just need to indulge in one or two cans a day—even if it’s the diet stuff.

The effects go beyond getting fat. A study in Epidemiology found links between a sugar-sweetened- soda-a-day habit and infertility. Another study, from the University of Melbourne, found that drinking regular soda can increase your risk of certain obesity-related cancers, such as liver and prostate cancer. Yet another reported that sugar-sweetened beverages contribute to “diabetes, high blood pressure, and other endemic health problems,” according to a press release from the Endocrine Society.

Dariush Mozaffarian, M.D., dean of the Friedman School of Nutrition Science and Policy at Tufts University in Boston, was the senior author of the study that generated one of the most shocking headlines: “Sugary Drinks Linked to High Death Tolls Worldwide.” In 2015, he and other Tufts researchers calculated that 184,000 adult deaths per year worldwide were attributable to sugar-sweetened beverages, due to diabetes and other obesity-related diseases. And no, it doesn’t matter if the sugar in the beverage comes in the form of organic cane sugar or high-fructose corn syrup.

I asked Dr. Mozaffarian recently how far we’ve come since then. “It’s still a massive global problem,” he says. “We published an investigation last year on the health risks of food and beverages in the U. S., and soda was still in the top five of food priorities in improving health, particularly for obesity and type-2 diabetes. 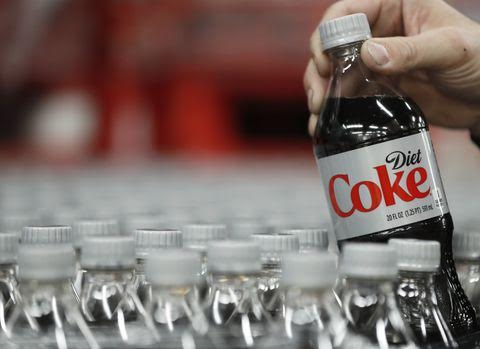 “There’s simply no reason to drink sugar in water,” he continued, but people still do it. “I’m often asked if diet soda is okay. Compared to what?”

The evidence about why diet soda isn’t a great choice is slowly emerging. Dana Small, Ph.D., a neuroscientist at Yale, recently found that sweetness triggers how your body responds to food. “Sweet taste regulates the generation of metabolic signals,” according to her study, linking artificial sweeteners to weight gain.

Another study, conducted by endocrinologist Sabyasachi Sen, M.D., found that consuming low-calorie sweeteners may predispose overweight individuals to diabetes. How’s that work? In the study, as researchers increased the dosage of sucralose, more cells started to store fat. One explanation: Cells have “transponders” that allow sugar to enter. Sugar that is not used is converted to fat. Artificial sweeteners ramp up this process.

“Artificial sweetener is 600-fold more sweet than sugar, so the downstream effect is almost the same as sugar, which is essentially fat accumulation and fat gain,” Dr. Sen told me. “This may not happen immediately, but it will over a period of time.”

“There’s very good evidence that if you’re going to drink regular soda, you’re better off drinking diet,” says Dr. Mozaffarian. “But diet soda by itself, is that better than drinking water or seltzer? Not at all.” This is because the sweetener tricks your body into thinking it’s consuming sugar. A 2018 study on rats found that artificial sweeteners may impair the body’s ability to process fat and generate energy, as well as damage cells that line blood vessels. More research is needed to prove an effect in humans.

“Long term, drinking an intensely sweet drink with no calories can change taste preferences and unconscious desire for eating,” he says. “Will an apple taste sweet anymore? Will a carrot taste sweet anymore? If you have a supersweet soda, the natural sugars in foods won’t taste the same.”

When I gave up all soda, diet included, and switched to green tea to help keep me caffeinated, I instantly began to think more clearly and have more energy. One month in, I noticed I could “cheat” more at mealtime and still lose weight. I realized my abs were more defined. Now when people tell me I look good for my age (I’m 41), I don’t just thank my genes — I thank giving up soda.

Okay, so this is anecdotal evidence, but experts back me up. Kristina Ingeborg Rother, M.D., of the National Institutes of Health and an expert on artificial sweeteners, thinks people see benefits from dropping the pop because their tastes adapt, and because of diet soda’s disruptive effect on their gut biome. “The bacteria that live on us and in us are actually very helpful to us,” she says. She delineated a study in which bacteria from obese mice were put into the guts of thin mice; the thin mice got fatter.

Conversely, the obese mice, when given gut bacteria from the thin mice, grew thinner. A similar test was done with artificial sweeteners. “An Israeli scientist gave mice three different artificial sweeteners at a dose that humans can ingest,” she says, equivalent to four diet sodas a day. “The mice developed higher blood sugars. When their gut bacteria were transplanted into unexposed mice, they also developed higher blood sugars. Now, are humans like mice? It’s just plausible.” Dr. Rother’s next study may involve mothers ingesting artificial sweeteners; she will check the feces of their babies to find out whether their bacteria changed. 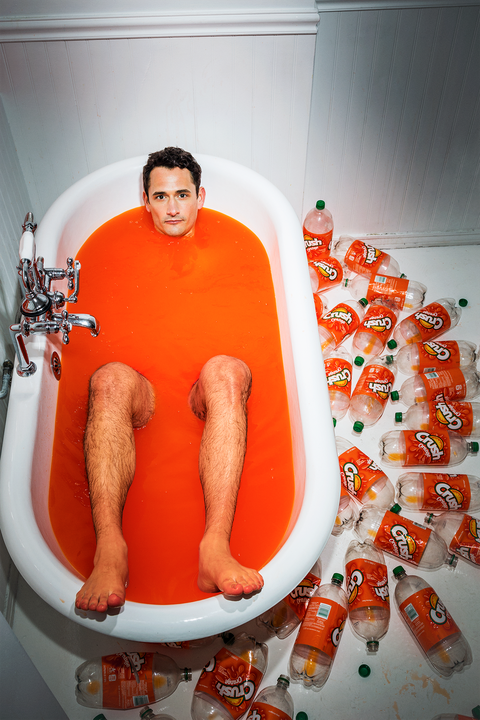 I gave up soda to change my life — and I’m not alone. In its heyday, consumers drank 49 gallons of soda per person every year, the equivalent of about half a liter a day. That’s about a full bathtub’s worth of soda per person.

Dr. Mozaffarian sees change coming—slowly. He cites the fact that PepsiCo is reducing sugars in its soft drinks globally, and that the “soda tax” in cities like Philadelphia has helped reduce sales. “In 10 years, we’ll look back on the way some sports stars and music stars now advertise soda to kids and wonder, What were they thinking?”

Ultimately, the most effective way to bring about change may be by making soda uncool. After all, it was vanity concerning my sluggish, heavier self that made me give up my habit. Whatever your reasons for doing so, it’s time you make the commitment. The inspiration and information here can help you crush your soda habit for good. It’s easier than you think. 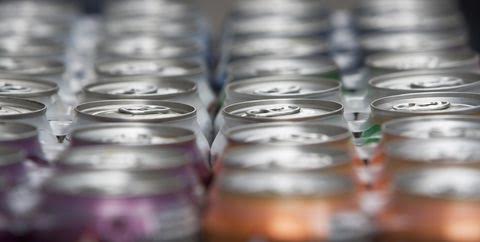 It was challenging for me to ditch the pop, but it won’t be for you. That’s because I asked experts — from the National Institutes of Health, Emory University, and Tufts University — to help me develop a plan for detoxing.

Rather than switch to diet, find a swap-in for the same elements that make cola great. For the fizz and the sweetness, buy a fruit-flavored seltzer like Spindrift. For the caffeine, try green tea, which is full of antioxidants. Kristina Ingeborg Rother, M.D., of NIH, recommends water with oranges and lemon in it, like you’d find at a nice hotel. I like Sound, a sparkling tea. The chamomile variety tastes like cream soda and is sugar-free.

Drink your replacements at the same time you’d drink your sodas—during that 2:00 p.m. slump, or at the movies. I’ve replaced my breakfast Diet Coke with Earl Grey.

“If you want to reward yourself, go get a cup of coffee and put 1 teaspoon of sugar inside,” says Dr. Rother. “That’s 16 calories. If you want to have the soda, have the soda once in a while,” she adds. “Don’t be on a constant guilt trip. But stay controlled. Your brain will figure this out.”

Every day, your resolve will be tested by new flavors, new commercials, and new gimmicks. Don’t be fooled. The sooner you see those shiny cans as a desperate marketing tactic, the easier it will be for you to combat your cravings. “Awareness is first,” says Jean Welsh, Ph.D. “Healthy behaviors follow.”

After six months off the stuff, try a taste of soda. It’ll be sweeter or more metallic than you remember. “I can’t stand the taste of soda now,” says Dariush Mozaffarian, M.D., but he could be quoting me.

(Adapted from an article by Michael Freidson, Photographs By Andrew Hetherington Aug 7, 2018)